Watching Firefly For The First Time: "Our Mrs. Reynolds" ...

What time is it, boys and girls and boys?

Yes, my friends, it's time once again for me to watch some Firefly. 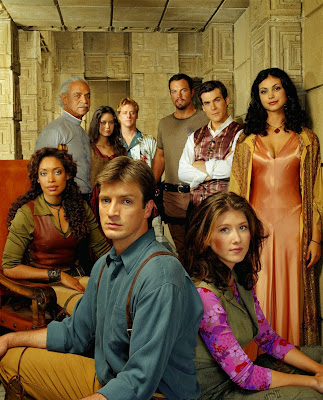 Well, it has been a few weeks now since I started taking my first steps into the larger worlds of movies and tv shows that I've never bothered to watch, the first one being Joss Whedon's Firefly. My first few step into the world of the Browncoats was a good, strong, funny blog post that I really liked very much. Then I saw the second episode and, technically, the second first pilot, and that was even better. The third episode didn't have a lot to say but it was still a grrrrreat blog post!

And so now it's time for me to sit down and watch the fourth episode, which I'm having some trouble with here.

See, according to the internet, the fourth episode is apparently entitled "Shindig," which to me ranks right up there with the past episode in terms of horrible names for an episode of a science fiction television show. Seriously, I thought that "Bushwacked" was bad and now this.

Buuuuuuuuuut according to my Netflix account, the fourth episode is entitled "Our Mrs. Reynolds" and has to do with Mal accidentally getting married.

Well, I guess I could change the order and watch them properly ...

But apparently Christina Hendricks is in this episode. And I'm a big fan of two big parts of her.

The opening scene where Mal is in drag? Ok, first off, I obviously support being in drag. Secondly, I have been waiting to see Mal in drag for a while now because it's been a very popular internet meme that keeps popping up on my faceybook feeds ... 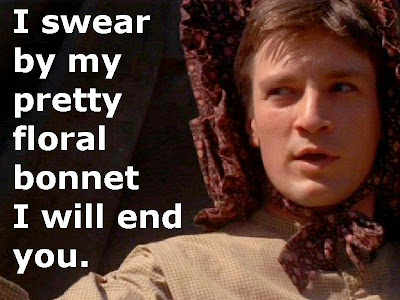 So it's nice to finally see the scene. Good stuff.

And I mention Old Tucson because it really does LOOK like the hoedown and NOT because I have successfully dissed Tucson in every review of Firefly I've written so far.

I'm confused as to why the guy from Chuck, the angry guy, whatshisname, the muscle, Mr. Facial Hair, umm, Jayne, I think, but anyway, I'm confused as to why this rough, tough, hard nosed guy gets all teary eyed and Frankenstein-ey when the elder gives him a rain stick. He gets choked up and, directly taken from "Bride of Frankenstein," he says "You ... friend." It doesn't make any sense. Hey, it's funny, sure, and I know that he's supposed to be playing drunk there, but it still doesn't make any sense character wise.

But hey, whatever. I'm focusing too much on this.

It's happening ... see, when I first saw Firefly and I first heard the theme song, I chuckled at it. I thought that it was silly and a bit heavy handed. Cheesy. Now I look forward to hearing that twanging guitar and those sappy lyrics.

Specifically, THIS is happening to me ... 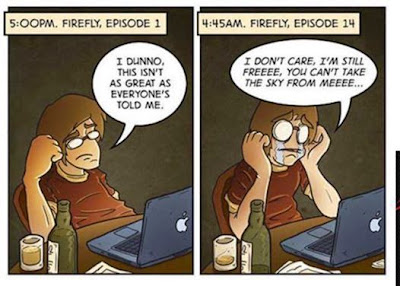 Christina Hendricks. I love her. And not because she's got a huge rack.

Ok. Yes. It's because she has a huge rack. I'm a guy. Okay? And I'm quite impressed as to how this show managed to keep her bountiful rack covered up in Old Tucson costumes so far.

So, after Mal realizes that he's married and gets angry and PaleBoobs (my new nickname for Christina Hendricks, so, tell your friends) runs off in shame, Kayley and Mal have some words with each other in Chinese. And I'm sorry. Every time I hear people talking in Chinese in this show I CANNOT think of Cloudy with a Chance of Meatballs 2 ...

I guess that just shows that I'm a dad.

BOOK: "If you take sexual advantage of her, you're going to burn in a very special level of hell. A level they reserve for child molesters and people who talk at the theater"

Verrrrrry good. I just golf clapped to that line.

Wow. Christina Hendricks, PaleBoobs, washing your feet. That HAS to be a Japanese website somewhere.

OOOH! JAPANESE WEBSITE! HAVE I NOT MENTIONED THAT BEFORE?

Ok. So. I have a theory.... every single thing that ever happens has a Japanese website somewhere that eroticses it. A fat woman at a Wal-Mart sneezes into her shirt? Japanese website. A grandmother picking a wedgie in a dirty McDonald's bathroom? Japanese website. A busty ginger actress dressed as a pioneer woman wanting to wash your dirty feet? That is DEEEEEFINITELY a Japanese website SOMEWHERE. In fact, sometimes during my day I'll witness something and just blurt out "JAPANESE WEBSITE!" because it amuses me.

Mal just told Jayne to "Go play with your rain stick." Nice. Me, I've already played with my rain stick today. I usually do when I wake up. TMI right there, I know, but whatever. This is my blog after all.

BOOBS! I mean almost, because this IS a television show and not the HBO or Showtime version of television. But still. BOOBS! 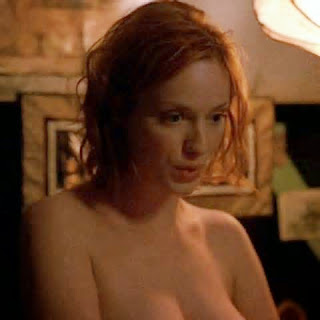 So PaleBoobs turns on Mal. I will admit that I did not see that coming. And now she's taking over the ship. Nice. She's really kicking ass on this. Good for her.

So she takes off, they are going into some sort of net, they survive, and now they go looking for her. They find her, fight, and Mal punches PaleBoobs in the face. Again, Japanese website. That is toooootally a Japanese website, some web address like WesternWomanHappyPunch or something like that.

Good episode there. I mean, I was expecting a shindig and instead I got PaleBoobs, so that was definitely an upgrade. It's interesting that Netflix has the order of the episodes all screwed up, but I must admit I was pleased with the episode that I saw and I'm not just saying that because of the boobs. No, it was a fun episode. It wasn't all serious and moody and dialogue heavy. It was light and fun and I enjyed myself very much.

But I think I'll get back to the regular order of things next time.

Email ThisBlogThis!Share to TwitterShare to FacebookShare to Pinterest
Labels: Browncoats, Christina Hendricks, embrace the badness, Firefly, japanese website, Joss Whedon, pale boobs, WHERE IS BUCKY AND WHAT HAS HE HAD 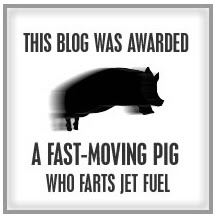 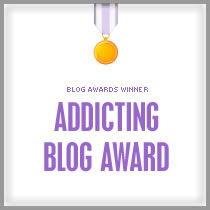 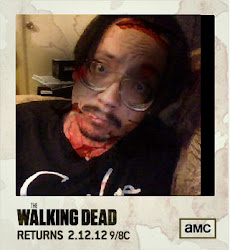 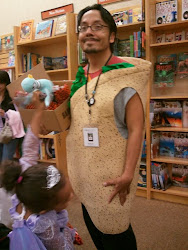